Enough already. This madness has to end. (Please help.)

Truth, Justice, and the American Way
A Political Ritual for Our Time
Brought to you by the Pillar of Smoke (http://www.jewishmagic.net)

With special thanks to Sara, Jason, Troy, and Vlad, our collaborators in the Facebook brainstorming session that led to this ritual.

It’s long past time liberal magicians took it upon ourselves to create some real and lasting change in this country - and let's face it, most magicians are probably liberal. This ritual is designed to affect not just the election, but the political climate of the country for at least the next several years, nudging things in the direction of listening to new voices such as third parties, removing the influence of money from politics, and creating true economic equality. If the idea of using magic in this way bothers you, probably best to move on; no harm done. But if the idea of getting specific, measurable political results with your magic excites you the way it excites my friends and me, then please read on, and share this ritual with your friends before election day.

Try to put aside any long-standing assumptions about what is or isn't possible to accomplish through magical means. Also realize that even if we only manage to change the national consciousness around  voting just a little, that will still be a victory. And even such a small victory would likely be enough to clinch the election. Rest assured, though, that our results will be anything but small.

We have attempted similar magic once before on a similar scale, before the 2006 election. Because of the popularity of the V for Vendetta movie and my own fondness for the graphic novel, I (Jason) made the decision to use the character V as the thoughtform the ritual evoked. Evoking fictional characters is a reasonably normal practice in chaos magic, but many practitioners from other traditions had issues with it, and in retrospect I should have realized that might be a problem. (That ritual can be found here.) This time, I hope I’ve made wiser evocation choices.

We have used angels because they are both ancient and reasonably universal, and honestly because Jewish magic is what I know best these days. I say “universal” because at least in theory, any Jew, Christian, Muslim or Ceremonial Magician should have no problems dealing with them, and hopefully they’re acceptable to some pagans as well. Angels also make sense because they allow us to work within a similar paradigm to our political enemies, the Tea Partiers and the Christian Right, and the best way to disrupt a system is from within. Make no mistake: liberals are on the right side of history on (at the very least) every civil liberties issue, and more to the point, the bible is on our side too. For some very thought-provoking documentation on that, take a look here.

If you belong to a pagan tradition that forbids you from using angels, or if it just makes you uncomfortable, by all means substitute appropriate spirits or gods from your tradition. (I wouldn’t presume to tell you which ones, because I’m sure you know your own tradition far better than I do.) The same goes for the Hebrew names such as Adonai Elohim, which are in brackets to let you know that if you don’t want to use them, you can skip them. It may lessen the result somewhat, but then again, I may only think that because I’m Jewish.  Just use your common sense, accumulated wisdom and experience, and everything will be fine.

At the end of the ritual, we mention the servitor FOVWINC, which we empowered the evening of October 31. The name is assembled from the first letters of the seven major swing states (Florida, Ohio, Virginia, Wisconsin, Iowa, New Hampshire, and Colorado). FOVWINC’s purpose is to provide a vehicle into which we can all pour our shared energy during this working. After the ritual is concluded, it will draw its sustenance from the economic and social results it helps to create, for as long as we need it. This ritual will empower you to use FOVWINC in your own magic from now on. It will be glad to help you with any magic that pursues justice, equality or truth, on as small or large a scale as you wish, and every use will strengthen it a little more. If you like, you can drop the sigil on a piece of paper or write it in any place that could use an injection of equality, justice and/or truth, and FOVWINC will take care of it.

Start around 11:30 or 11:45 PM on November 5th with whatever banishing or other practices you normally use to start ritual. If you don’t usually use a banishing ritual, we might suggest the Lesser Banishing Ritual of the Pentagram, which can be found at this site. If you like to use scented oils for your magic, Abramelin oil would be most appropriate for angelic work; if you like to burn incense, any combination of frankincense, myrrh, cinnamon, calamus and/or cassia would be fitting. (We find frankincense to be particularly useful because in addition to being a traditional offering, it is also mildly psychoactive, so it will help to get you in the proper mood to do magic.)

Begin the ritual below at midnight. To be clear, that’s the midnight between the 5th and the 6th, the very very beginning of election day. Among other things, we are magically setting the tone for that day. If you have multiple people taking part, we suggest marking who will read which parts ahead of time.

O Raguel, Angel of Justice, spirit of harmony and freedom, wise and fair judge over all beings, we summon you. The servants of Mammon and Moloch have done great injustices in our name, causing ever increasing suffering to our people and our land. [In the name of  Adonai Elohim,] we adjure you: listen to our grievances, judge their merit, and dispense divine judgement upon the demons responsible, so that true justice will return to our country. Come, O Raguel, and hear us!

O Zadkiel, Angel of Freedom, spirit of mercy and forgiveness, comrade-in-arms of Michael, we summon you. The servants of Mammon and Moloch have plunged our country into depravity and despair with their violence, theft and lies. [In the name of tAdonai Elohim,] we adjure you: vanquish them, bind them, imprison them, so that true mercy will return to our country. Come, O Zadkiel, and hear us!

Attend us, O angels, and listen well to our accusations:

Mammon, demon of greed, has held sway over our land for too long.
Together he and Moloch, demon of corruption, have conspired to enslave us.
Their servants are insidious, infiltrating every part of our nation.

They have controlled our government, contorting its policies to favor their agenda.
They have destroyed our economy, expecting us to pay the bill.
They have started and prolonged an unjust war, sacrificing numerous innocents to their demon masters on the altar of profit.
They have contaminated our food, replacing honest farming with animal torture and natural crops with dangerous counterfeits, then deceiving the public to hide their sins.
They have acted illegally, then changed the law afterwards as if to absolve themselves.

They hoard wealth, while ignoring the poor and the sick.
They claim piety, but their every action is unrighteous.
And now, one of these dangerous hypocrites claims to be worthy of leadership.

This cannot be.
This must not be.
We the People say, “No more.”
In the name of our country’s ancestors, the Founding Fathers, we demand your intervention.
What they built must not be corrupted any longer, or it will surely be destroyed.
We the People charge you with performing this sacred task.

We command you by the merit of John Adams, by his own words: “Banks have done more injury to the religion, morality, tranquility, prosperity, and even wealth of the nation than they can have done or ever will do good.”

We command you by the merit of Benjamin Franklin, by his own words: “Money has never made man happy, nor will it; there is nothing in its nature to produce happiness. The more of it one has, the more one wants.”

We command you by the merit of Thomas Jefferson, by his own words: “I hope that we shall crush in its birth the aristocracy of our monied corporations, which dare already to challenge our government to a trial of strength, and bid defiance to the laws of our country.”

We command you by the merit of George Washington, by his own words: “The propitious smiles of Heaven can never be expected on a nation that disregards the eternal rules of order and right which Heaven itself has ordained.”

Bind Mammon, that prosperity may come to all our citizens, not only the few.
Bind Moloch, that our government may serve all our people, not just the rich.
As these demons fall from prominence, reveal their worshippers for what they are: selfish, greedy creatures who deserve our pity, not our admiration.

Let your brethren of the Host join in your appointed task.
Together, aid those who work toward greater equality, prosperity, and accountability, both within and outside the government.
Bless those who dare to speak the truth, no matter who listens or what it costs them.
And heal our nation of the division that has caused our culture war, so we can all value each other for our diversity, not merely our similarities.

Most of all, on this election day, empower our servitor FOVWINC in its duty: to bring clear minds, wisdom and discernment to all who vote, so that those who truly serve all of the people will prevail.

(Face north. Draw FOVWINC’s sigil in the air, starting at the upper right where the dot is, while visualizing it superimposed over the country. Then do it again facing east, then south, and then finally west.) 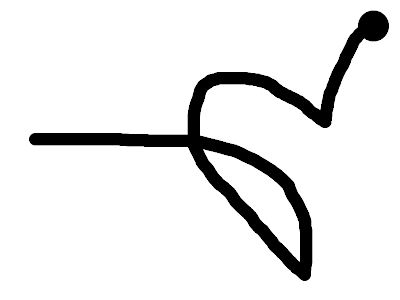 All these things we do command you in the name of We the People, [in the name of Adonai Elohim,] and by the merits of the Founding Fathers. You cannot refuse us, for our cause is just and our intentions noble. Now, go forth and do our will!

(Conclude the ritual by blowing out candles, turning on the lights, or however you normally end ritual.  The traditional Jewish magical way to end would be with either the words "Amen. Amen. Selah.", or if you're feeling a bit bolder, "Ken y'hi ratzon", which means "May this be God's will.")

Then go to sleep, and don’t forget to vote!)

If you'd like a downloadable PDF version of this ritual, you can find it here. Please be aware that I may not be able to update it with new edits as often as I update this page.

Posted by Chance J. Feldstein at 5:44 AM